I found some issues with Stata's leastlikely command, so I fixed it up a bit. If you're getting issues with missing brackets, or failed to generate "Prob" or the error option outcome() not allowed then this will probably help. It's called leastlikely2, but you can rename it.

I also found that to give it a variable to put the probabilities into, you need to give it a previously generated variable.

END_OF_DOCUMENT_TOKEN_TO_BE_REPLACED

Yesterday we did the vegies for the coop. And because I'm a vegie manager now I got a huge vegie box for my trouble. It's so huge and luscious-looking. As I bussed it home, so many people were looking at it enviously.

There's fruit in it too. Three super-giant peaches, and fresh figs and good stuffs. Libby and I made a spinach and fetta pie with all our spinach last night. It was one of the best things we've ever made. Libby took a way large slice for lunch today, and she usually doesn't take large portions of things I've helped cook.

Vegies make me so happy, especially when they're flowing over the edges of big boxes, or heading into my belly.

Emmeline, Val, Libby and I all went to Val's house last night to watch Young Adam. It was about a amoral, unlikeable, selfish, sleazy, young man called Joe. The film followed the his sexual encounters with married, or otherwise emotionally unsuitable, women. It was really montage of disturbing, depressing or painful scenes. And a good number of those were sex scenes. Gritty sex. The sort that make you realise why most movies have stylised sex.

Joe was the sole shithead in a sea of innocent and vulnerable supporting characters. For some reason, the film's women were utterly unable to resist his anti-charms. As Val said, after watching him lead a nice girl he'd just met away from the beach for quick shag (and a couple of years of emotionally violent cohabitation), "Life so isn't that easy." I hope she was right. I began to wonder if somehow the film's creators were living out their own amoral aspirations vicariously. It seemed to take such a joy in his actions.

We couldn't work out how the biblical references tied into the story. Maybe they just realised there really wasn't a story, and had to quickly pop in some random allusions to Eden so we would assume the true point had passed us by.

Given the that [a large public sector in developing nations] is an artifact of history, and that there is little or no reason to believe that governments in developing countries need to be more pervasive than in developed economies, it is not difficult to understand why contemporary development priorities accord a much higher place to public sector downsizing and privatization... Key Issues in Development

This is from our development textbook. Our enlightened contemporary textbook that's aware of all the politically correct ideas you have to reference.

I don't know where the hell they pulled this sentence from. There is still a huge debate over the right level of government intervention in the developed world. The average European would say the ideal level is a lot higher than the level we have here. And even if we've found a "good level" for us, that definitely doesn't mean that it's the right level for poor countries. I'd suspect they'd want a much higher level of intervention than robust, stable economies and societies. If the levels of goverment intervention developed countries had when they were developing worked for them, why is a far lower level considered optimal for countries that currently aren't developing at all.

This whole textbook is painfully written, and painfully argued. Ultimately I don't think they're any less prescriptive than anyone else - they just use write more crap before they prescribe something.

I made some very big scones this afternoon. They were really good. Not to mention big. 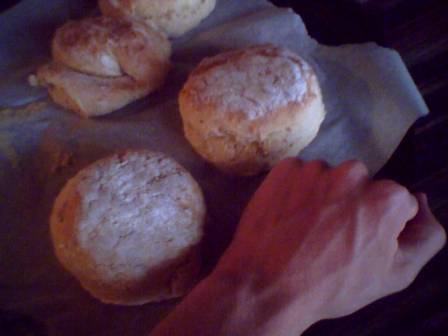 Libby and I are cooking eggs and mushrooms for everyone for breakfast tomorrow.

I'm way impressed by lighttpd. It's very light. And very httpdy. And it's config files rock.

Mailman with Lighttpd and mod_cgi

I've just got mailman working with lighttpd and mod_cgi (using mod_rewrite and mod_alias as well). As far as I know, it doesn't work with mod_fcgi (FastCGI).

The url.rewrite line redirects "/", "/mailman" and "/mailman/" all to "/mailman/listinfo".

This afternoon Libby and I had went for a walk up to the shops for ice-cream. Raj came too. I got an almond Magnum and Libby got a chocolate Cornetto.

When we got home I was standing on the driveway with Raj and May ran up to us. They were both a bit nervous at first, but I held Raj and May just sat there. Eventually Raj lay down, and so did May. I sat down next to Raj and read junk mail. It was real nice.

Update: Apparently the Cornetto was not a chocolate one, but actually a Tim Tam-flavoured one. Ingenious.

Has anyone noticed that Adobe Reader gets worse with every release? Version 4 was great. It was fast and didn't crash, and didn't spread it's tentacles into everything. I just installed version 7 onto mum's computer, but it freaked me out. It tried to install all this extra software everywhere, and Control Panel simultaneously broke so I couldn't uninstall it. I struggled with it for about 20 minutes, as everything crashed around it. Luckily I forcibly rebooted the computer, and uninstalled it before it could get a good foothold. You have to be ruthless with some software and kill them while they're initialising. I was lucky it took almost a minute to start.

Bob makes me so happy. I was talking with someone the other day about how good he was. They were talking about how good his lyrics were, and how pervasive the music had become. If you just forget about his voice. I said "No." It was awkard for a moment. I suspect they were worried they'd run into one of those fans you hear about, the sort willing to lose friendships and debate issues over many decades with the remaining friends. I sort of hope I become one of those fans. Fortunately, I'd only just met this person, so neither of us were that upset when I called the conversation to a halt and graciously left the room.

Lib and I went to Nishtha's 21st birthday party last night. Lib's almost running out of 20 year old friends, so there won't be many more. But it's been a big 12 months. We've really got into the flow of things. I've become good friends with people who I've only met at the 21sts of Libby's friends. I think our social life is really going to suffer between now and 2035, when everyone turns 50.

It was a fun and tasty party. Nishtha's parents cooked big tureens of wonderful India food. In the queue for the food, an Indian girl I'd never met asked me if I liked Indian food. I said I really did. She told me it was good to see people taking such huge servings. We had these enormous plastic plates, and I realised that what had been quite a respectable pile of Indian goodness had spread out across the plate, turning it into a rather more embarassing one-man feast. I tried to explain, that the plates were large, and the curry consistency was not very binding, and the rocking motion of the plate whilst I moved along the queue had all conspired to make me appear far more gluttonous that I actually was. She gave me a reassuring smile, but I'm unconvinced that my protests made my plateful any less inspiring to her.

After the eating there was some other stuff. The eating was really the focus of the evening. We did some dancing. The four white couples all danced with their respective partners. The white singles went and sat outside. And all Nistha's Indian friends danced in a tremendous big circle. There were some jazzy Indian dance numbers which really got some Indian feet tapping. Libby threw some cake at Tristan, which I think turned out to be less fun than we all had hoped. I had a nice time. Most of all I liked watching the way this lovely Indian community was so happy and bondy together. I wish other communities could be more like that. Particularly if it meant we got to dance with sticks and arm shaking at parties.

Sierra Leone's Melbourne 2006 attache, Robert Green, said he had not given up hope that the disappearances were due to an innocent misadventure.

Some of the athletes representing Sierra Leone have disappeared. They seem to be hoping that they haven't run away, but will be found at the bottom of a river somewhere. What sort of "innocent misadventure" could result in seven athletes disappearing?

Jem and I made scones yesterday, and redesigned her blog. It was way fun.

Oh bugger. I forgot to eat the leftover scones. I'd better do it now.

Libby and I made the best creamed potato last night. I think it's the best we've ever made, and we've made it twice now. We ate the whole tray of it in one night. Well, mostly I did.

We were also watching Buffy while it ate it, so that made it taste even better.

I've worked out why all my uni classes have been so confusing this semester. I just discovered that my phone is an hour fast.

This is the first subject that's really been the way university is meant to be. From day one you're scraping the barrel-bottoms of your brain just to understand what the man out the front is saying.

My development lecturer makes me so mad. The system needs to accumulate capital, he says. The poor won't benefit at first. In fact life will get worse for a little while. Some times a little while is quite a while. In Japan, for instance, it took about 60 years to start. 60 years! Lousy capitalists.

I read through a touch of In Defense of Globalization in the bookshop today. All the economically chauvinist things I read say it's done wonders for their sex life. I thought about buying it until I started reading it. It basically said that every area the anti-corporate crowd thinks is hurt by globalisation, is actually helped or unaffected by it.

For example, some misguided fools might think that the competitive pressures of globalised trade would reduce wages of unskilled labour. However, the data doesn't support this at all. In reality, the drop in real wages over the past couple of decades has nothing to do with globalisation. Globalisation has actually increased real wages. Just imagine how low real wages would be if it wasn't for globalisation! The real reason wages have dropped is that unions aren't as strong as they once were. Obviously, the destruction of the unions has nothing to do with globalisation or international competition.

Also because of new technology, the demand for labour has dropped and wages have fallen. Not just unskilled wages as you might think, but all wages. So the wages of the many souls who build these tremendous labour-saving devices does't make up for the lost wages of their less skilled comrades. So even though there are these brilliant labour-saving machines to reduce the amount of work we have to do, the average person has to work harder for the same quality of life. It doesn't seem very labour-saving to me. Perhaps these machines aren't labour-saving as much as profit-increasing. So we work the same or a bit more, produce much more stuff, and never see any of it.