a love song for bobby long

Libby, Laurence and I watched it last night. It was well good. John was better than he's ever been. Scarlett was Scarletty. It made me want to live in a dysfunctional community in a town in America. It wouldn't even have to be in New Orleans, but somewhere with rivers and caravans and sun. And jazz. Has to have jazz.

From time to time I have dreams about crazy people with knives. As often as not, they're out to kill people I'm fond of. Normally in those dreams I just get frightened, and run away or I wake up before anything really violent happens. I had a dream a few months ago (I think) and there was a crazy person with a knife wanting to kill us all. I had a chance to kill him with another knife, but I didn't because it freaked me out too much. When I watched horror films, I'm always the person saying "Come on! Just stab him in the head! He's going to get up again." It always seems like such sage advice when you aren't the person holding the knife/gun/pitch fork.

But last night I had a replay of this same dream. Half way through I recognised it from before. And the same opportunity came up again. I had two knives and a chance to kill the crazy man. And I did it. And it freaked me out. I woke up straight away, lying in bed wondering what I'd done and what it said about me. I have a new appreciation for why those people in horror movies ignore my advice.

Anmol and I watched Paycheck last night. Pretty average it was. But not nearly as average as Ben Affleck. Gee.

skinny have the goods. Man oh man. Do they ever fail? The PLO has its own TLD. It's in Palestine, so it ends in .ps. And instead of mil.ps or gov.ps they get plo.ps. I love it.

Everyone is so keen for Hamas to "renounce terrorism". Keen enough that they're willing to starve Palestinians and kidnap Hamas' ministers randomly. Why doesn't Hamas do what every other government does - renounce terrorism, and just keep doing it. They seem to be the only poor fools putting honesty before expediency. It's no wonder their government is doing so badly.

Take it to the limit

I bought some Logitech X230s a couple of years ago now for about $80AUD and they are really good. The bass is a bit heavy, but overall they sound tops - far better than a lot of micro hifi systems I've listened to. And they go much louder than I would really need, without distorting at all. Although my printer perches on top of the subwoofer, and the printer starts to vibrate audibly when the volume goes up too much.

I love my bedroom so much. In spring (which it is right now) it is simply the best little spot in the house. I feel so much like a little kid in some little house in Paris. I want to grow up in this room.

Wouldn't it be interesting to pick out students from high school at random and give them nifty university scholarships. The ones that got scholarships would be more likely to go to university, regardless of how clever or motivated they were. Then after 10 years you could go and see if they were making more money or being more productive or something. Then you'd know if university was useful or not. No one really knows if university is helpful. Economists kind of sort of think it's useful, but it's possible that university has no impact at all. Although even if university did earn you better money, it still might just be because you seem like a better proposition. Not because you actually are. So you wouldn't have all the answers. But at least you could say that university has more of an impact than just stealing the brightest kids from high school and then taking the credit for their brightness. Although now I think about it, you couldn't even do that. Those scholarship kids might simply get higher incomes because they went to the same institution that others smart kids went to. You'd need to use a university with no name brand recognition. Gee whiz. Practical economics sure is tricky. It's not wonder most economists focus on the impractical sort.

McDonalds has founded the McDonald's Center for Type 2 Diabetes and Obesity. I suppose they figured that selling hamburgers wasn't sufficient demonstration of their support for diabetes and obesity, so they're researching more innovative ways of increasing diabetes and obesity levels. I wonder if they decided that their facilitation of Type 1 Diabetes was beyond question, and decided to invest their money where it would have the most impact.

What would happen if, instead of looking at your UAI when you apply for university, they looked at your marks relative to the average mark in your postcode? I reckon that a lot of success at university is determined by personal characteristics and ability (which should be fairly independent of postcode) and not that much by absolute UAI (which is very dependent on postcode).

It would be good to have a way of removing the bias of high school quality and parenting resources from entry into university. If you were compared to the people in your postcode, rather than the people in your state, a lot of those extraneous-ish factors would be disregarded. I also suspect our universities will get higher quality students. I am certain that someone who gets a UAI of 80 where the average is 40 will generally do better at university that someone who gets 90 where the average is 90. University is all about effort, and a UAI isn't the best indicator of effort.

The other nice effect is that it would encourage all those North Shore parents who want their mediocre children to study medicine to move to Cabramatta. They'll be probably be horrified by the resources at the Cabramatta school they go to and so they might get together with the other North Shore refugees on the P&C to raise some extra money. Which would probably be an OK outcome. If you end up with educational equity instead of a "leg up" for capable kids in poor postcodes, that isn't the end of the world. You might even get the situation where North Shore parents are bribing Mt Druitt principals to let their kids in after their HSC trial results arrive. Which would be absolutely hilarious, and would totally make the whole system worthwhile by itself.

I was doing some "study" for macroeconomics, and I started thinking about the proportion of GDP going to workers. As you do. Apparently it has gone down in the last few decades, which I suspect is the reason the average P/E ratio on the ASX has stayed fairly constant even as liquidity has gone crazy. Productivity hasn't gone up much, because GDP hasn't grown that much, so you'd have expected profits per dollar of sharemarket money would have gone down. We're throwing money at all these super funds demanding a happy return, but most of that money isn't actually being invested in productive activities. It's just inflating share prices. Except that we don't notice the inflation because profits have gone up too. Normally they go up when business gets better at doing stuff (making a bigger pie). But sometimes profits just go up because companies get a larger share of GDP (which is just stealing someone else's slice of pie).

So anyway, I was sitting here, thinking to myself. And I read some stuff by Frank Stilwell and got to remembering some things. On the left, there seems to be this funny attachment to socialism, even when capitalism has managed to make everyone happy. There is the fear that capitalism will sneak into our lives and subvert all our heroic dreams for revolution by giving us everything we want. For instance, Menzies started helping workers buy their own homes, as a "bulwark against bolshevism". What a devilish plan! It worked. Now Australia has a high rate of home ownership, and nobody wants a revolution.

I have my doubts that the rich will ever let economic equality truly happen, but if they're willing to, then I'm not sure what the problem is. I suspect the rich would gas the poor, before they choose to share their merry mansions, but maybe I'm underestimating them. If you win the class war by making everyone bourgeois, then that seems rather good. My only problem with the bourgeois is that some people aren't. My only problem with capitalism is that it doesn't do what it says, and roots an awful lot of people economists reckon it's supposed to benefit.

The traditional medium of exchange on the island of Yap, was fei, stone wheels up to 12 feet in diameter. These stones had a hole in the centre so that they could be carried on poles and used for exchange.

The stones were heavy, so it took substantial effort for a new owner to take his fei home after completing a transaction. Although the monetary system facilitated exchange, it did so at great cost.

This practice was put to a test when a valuable stone was lost at sea during a storm. Because the owner lost his money by accident rather than through negligence, everyone agreed that his claim to the fei remained valid. Even generations later, when no one was alive had ever seen this stone, the claim to this fei was still valued in exchange.

From my macroeconomics textbook. I reckon that is really cool.

As George says, not just any kind of comparison will do. When comparing the behaviour of the United States to those of Islamic extremists, we can make satisfyingly specific comparisons. 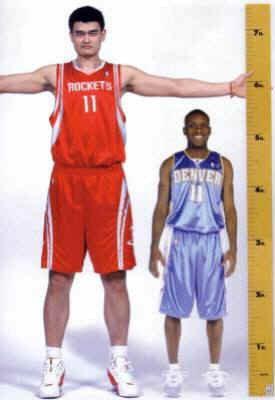 And they claim the Chinese are malnourished.

Two hours and 38 minutes into my econometrics study I have completed question 1 part b and c. Lucky I did part a the other day, or I would have been here all day. Now I only have questions 2 to 13 for chapter 3. And then the questions in chapters 4 through to 16 (minus 12, 13 and 14 thankfully). Rocking.